The time had finally come for Hilary and I travel to our final destination together, the small city of Oaxaca. I had been been regaled with countless tales of how amazing Oaxaca was and had decided to book in to a language school that would also coincide with being here for dia de los muertos (day of the dead).

Hilary and I arrived after an 8 hour bus ride through the windy Oaxacan mountains, we had been told that these mountains were so windy that the bus driver is kind enough to pull over for those 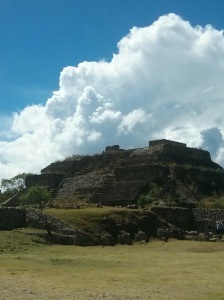 that need to vomit, but alas it was nothing in comparison to New Zealand windy roads and no vomit was to be had. We arrived to the beautiful cobbled streets in the late afternoon and wound our way through to check in to our Posada.

After dropping our bags we went out in search of the famous mezcal of the area, and settled in to a lovely restaurant for several mezcal margaritas and delicious food. With Hilary only being here for two full days we decided to skip any trips outside the city and spent the days wandering through the markets full of gorgeous locally made leather work, chapulines (grasshoppers as snacks), and local handicrafts. For Hilary’s final night here we went to a fancy dinner at Los Danzantes and gorged ourselves on huge steaks and figs and ice cream for dessert. I saw Hilary off to the airport and then moved over to my new 12 bed hostel.

The first few days after she left was the first time that I felt lonely. Although I am used to travelling alone it was a major shift from having someone with you constantly for two months to being a solo agent. I spent the few days before I started my language 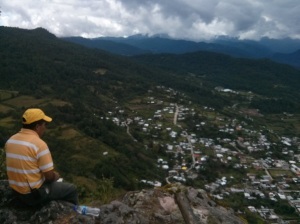 school fully acquainting myself with the city, eating and visiting many museums. I also took a trip up to the Monte Alban ruins which were the capitol of the Zapotec empire (connected with Mayans but different tribe) and heading out to the Sierra Norte mountains to hike with a local guide.

The Saturday prior to the start of school I needed to take a proficiency test and met a lovely American lady and we ended up hanging out for the rest of the week getting in to mischief. Kim and I met up for some drinks later that evening and stumbled

across one of the many comparsas (parades through the city with giant puppets and bands and fireworks) and watched it all unfold from the rooftop bar.

The following week arrived bringing both the start of school and of dia de los muertos. Retrospectively I perhaps should not have started school the biggest party week in Oaxaca as I certainly spent more time in the evenings at mezcal bars than studying. In fact I spent so much time at my favourite mezcal bar that the lady recognised me on the street and waved to me…

Anywho school was predictably hard after being a few months away from Spanish, but in the afternoons we spent time making masks for the dia de los muertos parade on the Friday. During the

week Kim and I went to great anthropology talk about all the traditions of dia de los muertos.

The end of the week finally arrived and school finished early to parade down the streets with a band in our masks and mezcal in our hands. Afterwards we switched to caterina face paint and went for a spin around the streets of Oaxaca on bicycles lead by a giant boom box. The next day my hostel was having a Halloween party so Kim and I grabbed some last minute costumes together and she dressed as a cat and I went as Frankenstein’s bride (suprising I didn’t go as the cat, I know!). After many mezcals and not winning the costume contest (of which I was clearly cheated from) we went out to xoxo cemetery to see families gather to visit with their recently departed muertes.

After wandering through the beautiful and rowdy cemetery we went to a zombie club and danced the night away. Late, late the following day after I recovered from my hangover I visited the city cemetery which was a much more sombre affair, at least until you exit the gates and enter a giant fairgrounds.
The following day was the end of dia de los muertos and there was 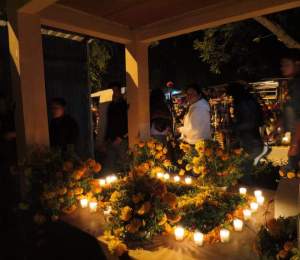 supposed to be a huge comparsa through the streets, but somehow we couldn’t find it so went to the market for BBQ mexican style, and of course ended in my favourite mezcal bar.

This week I am trying to be head down tails up with Spanish study before I leave Oaxaca to stay with a local family of weavers in the mountains. Then a hop skip and a jump on to Guatemala!